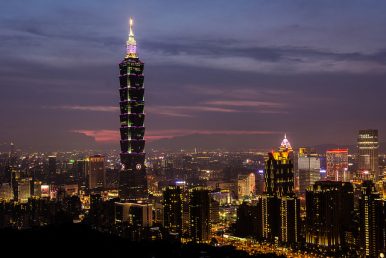 Can Taiwan reinvent itself as a part of Southeast Asia?

Whether seen as an independent state in its own right, or as an appendage of China, Taiwan has traditionally been perceived as solidly part of “Northeast Asia.”

But recent policy trends enacted by Taiwan President Tsai Ing-wen and the Democratic Progressive Party (DPP)-led government since 2016 suggest that the Southeast Asian bloodline within the island’s identity is finally getting the spotlight it deserves.

According to the Taiwan National Security Survey and related analyses, only 3 percent of Taiwan’s citizens identified exclusively as “Chinese” in 2014, with more than 60 percent of the population claiming “Taiwanese” as their sole identity. This has been understood by many as the cumulative result of “Taiwanization” processes since Lee Teng-hui’s presidency in the 1990s, while China’s assertiveness toward Taiwan also played an important consolidating role.

But while most discussions on Taiwan’s peculiar identity during the authoritarian years and the early post-authoritarian years focused on drawing cultural differences between “Taiwanese” and “(mainland) Chinese,” multiculturalism and liberal democratic values increasingly underlined Taiwan’s identity discourses. As the notion that Taiwan was a mono-ethnic Chinese society quickly lost popularity after democratization in the 1990s, Taiwanese increasingly saw themselves as members of a multicultural immigrant society which consisted of the following population groups: Indigenous peoples, Hoklo people, Hakka people, and Chinese that came to Taiwan after 1949.

Also starting from the 1990s, besides the above mentioned four population groups, the growing number of “Taiwanese new immigrants” also started to plant new seeds into Taiwan’s identity. Most of this new population came to Taiwan from Southeast Asia and China as result of transnational marriages with Taiwanese spouses. According to the Ministry of Education’s recent statistics, offspring of “Taiwanese new immigrants” now make up 10.07 percent of the student population in Taiwan’s elementary schools and junior high schools, whereas it only accounted for 3.83 percent ten years ago. Around 41 percent of these students had parents from Vietnam, while near 10 percent had parents from Indonesia. Ethnic Southeast Asians have surely attained a significant presence within Taiwan’s demographic landscape.

Now roughly at 3 percent of Taiwan’s population (with over 600,000 people), “Taiwanese new immigrants” are increasingly transforming how Taiwanese perceive themselves and their relationship with Southeast Asia. While prior examinations of Taiwan-Southeast Asia linkages emphasized Taiwan’s Austronesian heritage (commonly associated with Taiwan’s indigenous peoples), rising transnational marriages between locals and Southeast Asians after democratization have implanted new “Southeast Asian” cultural lines in Taiwan’s once predominantly “Chinese” history.

The idea that “Southeast Asian-Taiwanese” are an indispensable part of Taiwan society had already been encouraged by the Taiwanese government in the 2000s. But it was only after then-presidential candidate Tsai Ing-wen’s announcement of the New Southbound Policy (NSP) in 2015 that a decisive boost was delivered in the social perception of Southeast Asians and Southeast Asian countries in Taiwan. Some of it had to do with Southeast Asia and ASEAN becoming drivers of global economic growth, while the idea that Taiwanese were “different” from Chinese with the existence of Southeast Asian spouses and migrant workers also gained traction, especially among the post-2014 Sunflower Movement Taiwanese youth, who were eager to delineate a separate Taiwan identity.

This reimagination of identity did require rediscovering Taiwan’s once neglected ethnically Southeast Asian population as much as possible. Some local opinion pieces even cried out that “Taiwan should no longer be the southernmost point of Northeast Asia, but Southeast Asian’s northernmost country instead,” while many scholars went on to emphasize Taiwan’s historical ties with the region to its south. Taiwanese publishers followed through this trend by translating numerous books on Southeast Asia into the Taiwanese book market, while the number of Southeast Asia-related arts and cultural events also grew exponentially. Most important, however, was the extensive news coverage Southeast Asia and Southeast Asians in Taiwan has received since 2016.

To be sure, Tsai’s government was not planning to move Taiwan toward a “Southeast Asian” identity through moves like the NSP. Tsai’s administration merely aimed to re-emphasize Taiwan’s location, as stated in its tourism authority’s marketing catchphrase: “Taiwan: The Heart of Asia.” But Taiwan is truly more than its Chinese immigrants and indigenous peoples. After the native languages of Southeast Asian immigrants were taught in elementary schools for the first time under a trial program last year, Taiwan’s Ministry of Education has announced that it will officially list Vietnamese, Thai, Cambodian, and Bahasa Indonesia as compulsory subjects alongside indigenous languages, Hoklo and Hakk,a in Taiwan’s elementary schools starting from August 2019. Taiwan is also making great efforts to incubate its young, ethnically Southeast Asian talents by holding exchange programs for them to reconnect with their parents’ country of origin, while also training and supporting them to become future spearheads of Taiwanese businesses in Southeast Asia.

And apart from NSP related policies, recent revisions in Taiwan’s draft guidelines for history textbooks have also increased an emphasis on East Asian and global contexts when teaching Chinese history. The previous three subdivisions in history textbooks — History of Taiwan, History of China, and World History — were seen by many as a compromise between the rising “Taiwanese” identity and the fading “Chineseness” that was state-imposed and state-supported in authoritarian Taiwan under Chiang Kai-shek and his son. In that light, the new proposed “East Asian Contextualization” of Chinese history has been celebrated by many as it will include more content on Japan, South Korea, Mongolia, and Southeast Asia, which will highlight Taiwan’s inclusive and dynamic “Asian” identity.

As democracy and multiculturalism gradually roots in Taiwan society, “Southeast Asian-ness” in Taiwan has turned from an identity that Taiwanese society once implicitly sought to assimilate (into its predominantly Han Chinese culture), into a cultural treasure trove that Taiwanese yearn to preserve and emphasize.

But one question looms in the background: To what extent can “Southeast Asian-ness” continue to progress within Taiwanese identity? After 400 years of predominantly Chinese immigration and its recent 70 years being ruled by the “Republic of China,” Taiwan is heavily invested within Northeast Asia (and culturally China in the eyes of many). But one should not underestimate the consequences of China’s growing assertiveness toward Taiwanese identity. If increasingly pushed into the corner by China’s claims to its sovereignty, many Taiwanese will utilize whatever resource they have to underline difference with China. That already includes pride in Taiwan’s liberal democracy and indigenous population, and now gradually encompasses its rediscovered Southeast Asian heritage.

This article is published on The Diplomat